Harvesting environmentally stable energy is one of the biggest challenges facing the world today. It’s not that renewable energy sources like the sun, wind and water aren’t available to us. The problem with capturing natural energy and converting it into reliable electrical power is building economical infrastructures that leave an environmentally-friendly footprint with low carbon emissions and an undamaged ecology.

Fortunately for Americans, there’s one proven electrical energy production form that’s served the United States well for over a century. Hydroelectric power is based on water-driven generation systems, and it’s clean, affordable and dependable. Best of all, hydropower is a repeatable and renewable resource.

Hydroelectric power plants rely on nature’s hydrologic cycle to deliver constant streams of kinetic energy that’s mechanically converted into electrical current. Hydroelectric power stations deliver high-voltage feeds through a nation-wide grid that you can safely depend on every time you flick a light switch or plug in a device. However, hydropower plants wouldn’t exist without one main component required to build their facilities — concrete.

WHAT IS HYDROELECTRIC POWER?

“Hydro” derives from the Greek word meaning water. From that origin, hydroelectric power refers to electricity generated from a falling or fast-running water source. Humans have harnessed water power energy for thousands of years. The ancient Greeks and Romans captured water in reservoirs and used its mass to turn water wheels and drive irrigation systems. Before the Industrial Revolution, water wheels were common throughout Europe and Asia, where they powered mills and craft shops.

It was a natural progression that inventors would convert water power energy once the secret to electrical generation was unlocked in the mid-1800s. In 1882, the first commercial hydroelectric station opened in Appleton, Wis. Dammed-up water energy drove a Faraday turbine generator supplying electricity to the town’s paper mill.

During the first half of the 20th century, hydroelectric generator technology expanded to serve a nation-wide grid that supplied power to American cities and towns. With a strong demand and a continuous supply, electrical energy changed the face of America’s energy supply. A large portion of hydropower generation advances was due to evolving concrete technology that allowed engineers to design and build critical components like dams and spillways.

HOW DOES HYDROELECTRIC POWER WORK? 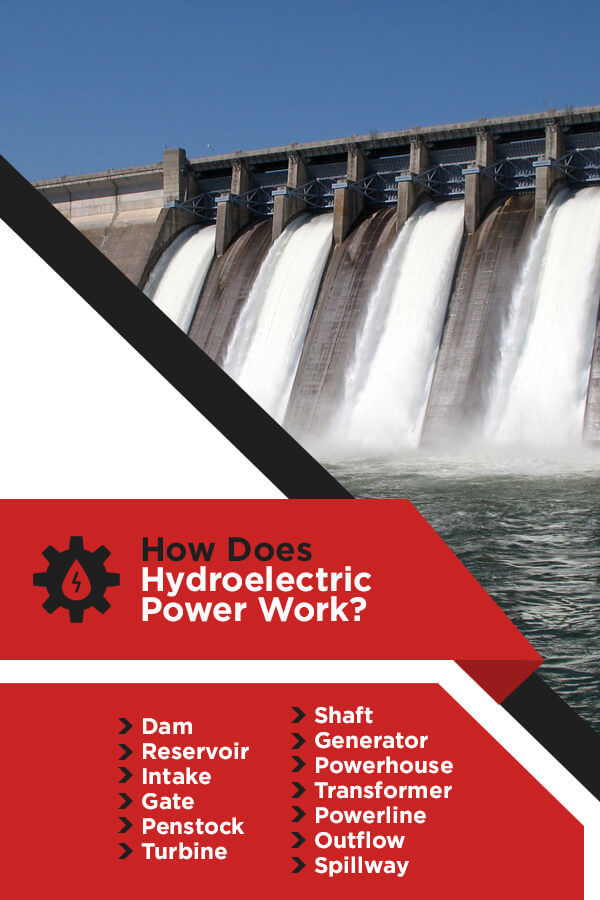 Although the engineering and mechanics behind constructing generators and concrete dams are complicated, the theory of hydropower generation is straightforward. Hydropower involves controlling and directing water flow through a turbine system that drives a generator wheel. Inside the generator, huge magnets rotate through equally large copper wire coils in a fixed stator. This creates an electric field, and the generated electric power then travels through transmission lines to the end user. Here’s a detailed look at the components in a hydropower concrete dam and its generation system:

No discussion about hydroelectric dams and plants is complete without mentioning the physics and mathematics involved in designing structures and components. Two factors play into how much kinetic, mechanical and electrical energy can be converted and harnessed in a hydropower plant. These are the size of the turbine and the generator capacity.

This brings in the dam height equation. Hydronic force at the turbine level is related to what’s known as “head height.” This is the reservoir water level backed up by the hydro dam and the distance from the water surface to the turbine. Producing power is a mathematical function of the hydraulic head and flow rate volume or how much water falls at a given time and how much of it is falling. The standard power creation formula is one gallon of water by volume at a flow rate of one second per one hundred feet produces one kilowatt of electricity.

This proven electrical generation formula is amplified many times over in hydroelectric power dam and plant design. As a simple example, a dam retaining a 100-foot water level is capable of turning one gallon of water per one second into a kilowatt, which is 1,000 watts. If you have 100 gallons of water at the same height and speed, you now produce 10,000 kilowatts of electrical energy.

A watt is an electrical measurement that shows work produced or how much electrical energy is used at a specific moment. You’re familiar, of course, with watts as they relate to light bulbs such as a 100-watt bulb being a little less than twice as bright as a 60-watt bulb. The same principle applies at hydroelectric plants, except they do it on a massive scale. Here is the breakdown of how watt figures apply:

Those are some impressive numbers when you consider the Hoover Dam produces 2,080 megawatts of electrical power at any given second and it’s not even on the list of the ten-largest hydroelectric dams in the world. These behemoths like China’s Three Gorges Dam produce 22.5 gigawatts of electricity per second. However, all the hydro dams in the world combined pale in comparison to the sun. Its solar rays shine an estimated 174 Petawatts of power on the planet constantly. Now that’s impressive production.

Hydroelectric power development comes from three main generation classes or types. Over the past century, engineers and scientists have experimented with many electrical generation techniques. Some power plant productions were successful, and some did more harm than good, such as nuclear power that heats water to drive steam-propelled generators.

Nuclear, fossil fuel and solar powered electrical generators have their pros and cons. Although all have been a boon to the concrete business where hydropower concrete companies contribute to infrastructure and safety systems, they don’t classify as true hydroelectric projects. The three actual power generation designs involving water energy are:

While conventional dam and reservoir systems are the mainstays in the hydroelectric production world, there’s no one-size-fits-all approach for their design. Each site employs a dam and reservoir design specific to their location and volume of electricity they’re expected to produce. Here are the four different concrete hydro dam and reservoir containment designs you’ll find around the world:

USING CONCRETE IN CONSTRUCTION AND REPAIR OF HYDROELECTRIC PROJECTS

Concrete is nature’s miracle construction material. Concrete is a composition of natural products including aggregates, cement powder and water. No building material is as environmentally sound, stable and economical for large-scale projects than concrete. For these reasons, concrete is the ideal material for building hydroelectric dams and their entire electrical generation components.

Engineers and dam designer have specified concrete as their main dam-building material for over one hundred years. Many original concrete dam structures still stand across America. This is an amazing testament to concrete’s enduring performance and longevity. Today’s forward-thinking dam builders rely on concrete products more than ever, and that’s because of some of the amazing breakthroughs in concrete technologies.

EXAMPLES OF HYDROELECTRICITY DAMS AND GENERATING STATIONS IN THE UNITED STATES

Concrete is the most popular hydroelectric dam building material found in the United States. While the U.S. doesn’t have hydropower projects as large as some concrete dam structures in other parts of the world, our domestic hydropower supply wouldn’t be the same without our concrete dams. Here are examples from the list of hydroelectric dams in the U.S.:

R.J. Potteiger Construction Services, Inc. is a concrete contractor who listens to customers and values a team approach to all project sizes. Whether your interest is large commercial construction, industrial services or a limited-scope residential package, we can make your concrete works flow smoothly.

For more information, call R.J. Potteiger Construction Services, Inc. today at 717-697-3192. Or, you can reach us anytime through our online contact form.